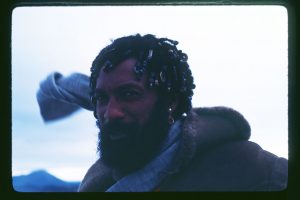 The great drummer, composer, and band leader Ronald Shannon Jackson is best known as a player of a giant Sonor set with Paiste cymbals in the 80s and 90s, but here he talks about the old A. and K. Zildjians he played earlier in his career, in New York in the 60s:

“I remember how turned on I was by the K. Zildjian sound to begin with. Then when I heard Art Blakey and the Jazz Messengers, that was really it. I’ve played A. Zildjians. My mother bought me a set of Slingerlands when I got out of high school. That set came with a 22″ medium ride and a pair of 14″ hi-hats, so I’ve played A.’s all along. But when I was coming up, all the hip guys used K.’s and Gretsch. Every month in down beat there’d be these ads, and everyone looked so clean and sharp in their suits and ties: Max, Philly, Blakey, Art Taylor, Elvin and all of them.

Basically I find the differences between A.’s and K.’s to be a matter of taste. A.’s aren’t bad. I just prefer the warmth of a K., but a K. can be a lot worse if you don’t get the right one. I’m talking about the old cymbals, now. I used to be able to go across the bridge to the Gretsch factory when they were in Brooklyn. They’d warehouse all the K.’s, but man, after Elvin and Tony and those guys had picked their way through, there wasn’t much left. I couldn’t believe how many bad cymbals there were, but I figured somebody’s got to be buying them. In fact, some of those warped, funny belled cymbals really work for cats. I’ve got a 22″ K. I bought from Frank Ippolito for $70, from his last shipment of Turkish K.’s. Nobody wanted it because it was messed up with a bad dip in the cup, but you can get some beautiful sounds out of it… sometimes. To me, the tones of a K. allow for a variety of inflections, whereas an A. doesn’t change that much. You can get a great sound, but it’s always going to have that distinctive A. sound: bright, high pitched; with that big cutting bell sound.

But see, there are all kinds of K.’s. Some of them were so metallic that by the third set of a gig you’d be tired of listening to it. That’s why you have to find the right one. That’s how me and Tony Scott fell out. We were playing a gig at a club in the Village, and I had two K.’s: a crash and a ride. Right in the middle of a tune, Tony Scott came over, took my cymbals off the stands and reversed them, putting my crash where my ride was and my ride on the crash stand. He was basically right, because that ride was just too hard, especially for clarinet.”

We currently accept payment by PayPal, Venmo, or money order.