A quick rundown of some cymbal lines, by Cymbal & Gong, that we’ll be seeing more of in 2022: Janavar, Cymbal Foundry, Midnight Lamp, and Second Line.

Janavar series are B20 cymbals inspired by a famous European B8 line of the 1960s. Originally meant to be light-weight cymbals for pop music, we find them to be great in a range of applications. Generally they have a full, non-clangy bright sound.

We’re making some Special Janavars in 20″ and 22″, with a heavy patina with green highlights, that makes them excellent contrasting cymbals in a set with Holy Grails. They remind me of brighter jazz sounds of the 50s/60s, perhaps on Milestones, or Bill Evans’s Vanguard recordings, or on some CTI recordings of the early 70s.

Cymbal Foundry series is a bit harder to nail down, but they’re really good cymbals. The line was originally created in partnership with a drum shop, and may be getting a name change, after that relationship expired. They’re generally clean and straightforward, in moderate conventional weights, but not without complexity— it could be described as a more complex 602-like sound.

Midnight Lamp is Cymbal & Gong’s name for a Turk-style cymbal. We special order a design that is slightly different— we get them thin, with the bells unhammered, and with no lathing at all. The regular Midnight Lamp has a slim lathed band at the edge, which adds some highs to the cymbals’ sound. I think our version has a more dusky, chocolaty sound.

The 18″ Jazz Ride is a popular item of this line— it’s a tight little cymbal excellent for rehearsals, recording, and other intimate playing. Or for drummers who just want a tight, dry sound.

Second Line series consists of two cymbals:  14″ and 16″ Swish or Chinese cymbals. Very thin, with a traditional bell. Cymbal & Gong has been prototyping Swish-style cymbals for several years, but largely hasn’t gone into regular production of them, until now. They are essentially effects cymbals, but are very expressive, with surprising sound possibilities, with echoes of Ed Blackwell.

The ones we’ve played have been outstanding examples of this type— they have that wild energy we want from them, while blending well with a regular Cymbal & Gong set up. Instantly responsive in a range of dynamics, and blessedly non-obnoxious. The larger prototype Swish cymbals have the same excellent qualities, and we hope to see more of them as well. 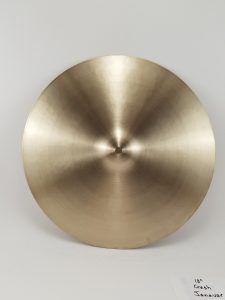 We just heard back from the buyer of an an 18″ Janavar crash cymbal— which was never listed on the site, and so there is no video, unfortunately! Cymbal & Gong’s Janavar series is a Turkish-made B20 cymbal inspired by a 1960s European B8 line, that was revived by its manufacturer in recent years. They are lush, moderate-weight rock cymbals, that are good for all kinds of music. We have a patinated 20″ Janavar crash-ride “Grayson” for sale on the site now, which would make a great left side cymbal for jazz drummers.

Here is what our buyer says about the 18″ Janavar crash:

The Janavar is… quite simply the best crash cymbal I’ve ever owned. Modern crash cymbals, no matter the weight, have a “clang” when hit softly. Heavier weights never lose it and lighter weights won’t let go of it until struck with enough force, at which point the room is filled with chaotic high-frequency radiation and the floor manager is giving you the stink-eye. That’s not an issue playing an outdoor rock gig but won’t do during dinner service or to the discerning ear of a studio microphone.

In contrast, the Janovar blooms and shimmers and all the player has to do is manage the amount of energy input via the stick. I would find myself moved to get in the practice room just to hear it again. It’s truly exceptional.

We currently accept payment by PayPal, Venmo, or money order.