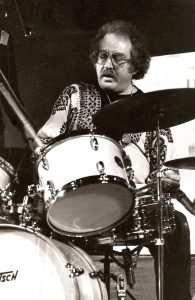 Mel Lewis talks about cymbals in his 1985 Modern Drummer interview. This is pretty much the bible on the subject, as it relates to jazz:

Number and type
The average drummer usually uses two to four cymbals. To have any more than that is totally unnecessary, because where are you going to put them anyway, and how are you going to reach them? They shouldn’t be there just for looks. I notice that most people have crash, crash, splash, ride, and hi-hat. Very few young drummers play on their hihats, except in the rock situation where they generally play them closed and they play their 8th-note beat on them. They should learn that the hihat is another ride cymbal to be played properly—”ta, da-ka, ta, da-ka, ta,” changing rhythms and all that, open/closed, all open, half open, half closed. There are a lot of effects. To me, the hi-hat is another ride cymbal.
Every cymbal I use is a ride cymbal. Every one of my cymbals is also a crash cymbal. I only use three. Three is enough.
But every cymbal should be a ride cymbal and every cymbal should be a crash cymbal. I’ve been noticing that almost everyone has only one ride cymbal and a million crash cymbals. You don’t need the crash cymbals. You need the ride cymbals, because that’s where your whole thing is coming from. Crash cymbals are only for accents, so you can hit any cymbal for a crash.

Dark
I find that all the cymbals should be dark. If you want a high-pitched splash cymbal or crash cymbal, fine. That’s to your own taste. But darker cymbals are more complementary to horns than any other kind of cymbal. High-pitched cymbals have a tendency to obliterate high sounds.
The more high-pitched cymbals you have, the more trouble you’re going to give the band. Also, for riding in a big band, I think that the pingier a cymbal is and the less overtone and spread it has, the more empty everything will be. It’s important that you have a good, full, fat-sounding cymbal. Finding cymbals like that today seems to be a problem. They are all too heavy. Definition is one thing, but those pings do not cut through. There has to be a little more sound to a cymbal than they’re creating right now. They’ve forgotten how to make ride cymbals with color. They don’t know what dark sound is. That’s why I still like the old K.’s. They’re hard to find, but it seems like they are the only cymbal that was made for music.

Orchestrating cymbals for big band
[W]hen you hit a high crash cymbal with the brass section while they’re up in that high register, you will knock out half their sound. But if you hit a cymbal that will blend with that section—in other words, if there are four trumpets and the fourth is playing the lowest part, you should be the fifth trumpet, which is lower yet. Now of course, we can’t go that low all the time, but that’s the way I’m thinking musically. Trombones, of course, can go lower than my cymbals can, so I want to be somewhere in the middle register where I don’t obliterate the lead and I don’t destroy the bottom.
With the saxophones, you want a roaring sound to envelop, because reeds don’t have the power that the brass has. That’s why I believe that during a sax soli— where you have five saxophone players standing up playing together—nothing sounds better behind them than a Chinese ride cymbal, because there’s a blend. Bass violin players love Chinese cymbals because the low sound and the Oriental type of roar make the bass sound spring forward. That’s why, when we play big ensembles, I’ll go to that cymbal, and you can hear the bass just singing through everything. When you’ve got a whole ensemble, you want a strong, enveloping, low sound with a lot of clarity as far as the beat is concerned. It’s like a picture with a beautiful metal frame around it. It gives tremendous fullness to the sound of the band.

Big band drumming
That’s why I prefer the darker sounding cymbals and that is why I tell every drummer, “Every cymbal you have should be a ride cymbal, because you should treat the different sections with a different ride behind it.” There is nothing worse than the monotony of one cymbal going on behind everything. When the band is playing along and they keep hearing the same cymbal sound, it just disappears in their minds. But when you make a change to another ride cymbal, it wakes them up again.
Even in my dark sounds there is still a higher sound, a medium sound, and a lower sound. I’ll use the high sound behind a piano. I’ll also use the lowest sound behind a piano. But I won’t use the middle sound behind the piano because it’s too much in the piano’s range. Behind the piano, a flute, or a muted trumpet, I’ll also use the hi-hats or brushes. When I’m playing behind, say, a trumpet solo followed by a tenor solo, and I know that the tenor player is a hard-blower, I’ll use the Chinese cymbal behind the tenor. Now, if it’s just going to be a trumpet solo, or if the tenor player has a lighter sound, I’ll use my normal 20″ ride cymbal. But I’ll always save my Chinese for the hardest blowing soloist.
I don’t work it out; it’s just automatic—which cymbal suits which soloist. I want to have a low cymbal behind a soloist who has a harsh, high sound. With a subdued type of player who has a softer edge, I don’t want something that strong, so I go to a lighter, higher sound to complement it. When the band is roaring, for main ensemble work, I would stick with my 20″ ride or I would use my hi-hats and really lay into them, which was the norm in the old days anyway. If it’s an ensemble that keeps building, then when I hit the final loudest point, I’ll go to the Chinese.
So I might play three cymbals in the course of an ensemble. If you have three choruses of ensemble— which is rare—the first chorus is not going to be that shouting. It’s going to build to that. The second one is going to be stronger so you change cymbals. Then you go to the roarer for your last one.
Another thing I’ve found is that it’s good to change cymbals on the bridge of tunes and then go back. A bridge is a musical change, so your cymbals should be a musical change also. If it’s the first chorus, I’ll play
hi-hats for 16 bars, go to a light ride cymbal for the bridge, and then go back to the hi-hats to finish it out. Then I’ll go to my chosen ride cymbal for the solo.

As and Ks
At the time of the interview, hand-hammered, K-type cymbals were only beginning to be widely commercially available again, after being difficult to find for a decade or more. The older A. Zildjians Lewis refers to were generally thinner and less clean/bright than modern ones since approximately the later 1960’s.

The old A’s were too—the old ones. But today, they’re thinking in terms of loudness and durability rather than musicality. I know what I’m talking about because I hear the complaints from everybody. I see it in your magazine here. Everybody’s complaining about the cymbals—that they’re all too heavy. Even the famous rock players are complaining that they can’t find enough colors in their cymbals, but that they would really like to find some. And everybody wants to have an old K. There’s a reason for that. I’ve been playing original K. Zildjian cymbals practically all my life.
The early hand-me-downs from my father were all K.’s, because that’s what he used. Then I bought my first A., which I still have to this day. That’s the famous one with the pieces cut out. Buddy Rich says it’s probably the greatest ride cymbal of all time. I feel the same way about it. Everybody seems to know that cymbal. Of course, it’s reached a point in its life where I can only use it occasionally, so I just use it for small-group recordings now, because it’s starting to crack again, but it still has its flavor. That would have been considered a bad A. in its time and it would be considered a horrible A. today because it was low pitch and a real medium weight, but that came from my K. ears.
Later on, when I came to New York, I used A.’s for a while. All my A.’s were really considered by most people as not very good. They were all low pitched, but they had definition. Bandleaders I worked for were always complaining about them—that they spread too much and so on—but that was what I liked. You either took me as I was or that was that. When I joined the Kenton band, I needed to use A.’s because they are louder and I needed the volume. So I stayed with the A.’s there for a while. One of my ride cymbals was that famous one, with two rivets in it, which is my trademark. To this day, I’ve been using two rivets in my ride cymbal. Of course, as soon as I left the Kenton band I switched to K.’s completely. That was the end of ’56. With my small-group playing, actually, I was using K.’s all along, but I became a permanent K. player from ’56 on.

For more background on Lewis, this Modern Drummer piece by Rick Mattingly is highly recommended.